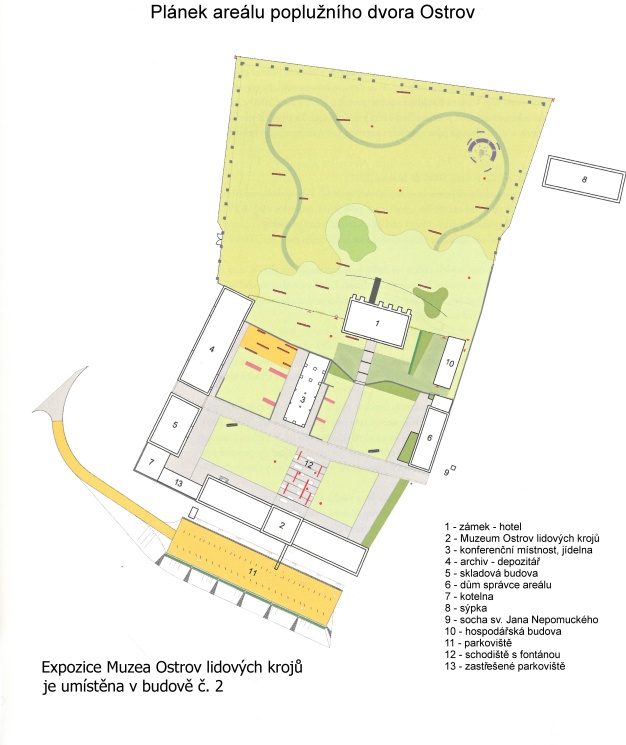 Brief history of the Ostrov Manor

The first written record of the existence of Ostrov dates back to 1257 and lists Petr of Ostrov as the owner. However, it is probable that the squires of Ostrov had had their family seat here since the 12th century. The present Baroque “chateau” got its shape in the 1760s and it probably built in place of a Romanesque stronghold. The eastern part of the ground floor encompasses the stone walls of this old stronghold from the 13th century. In the line of squires (lords, knights) bearing the title “of Ostrov” we can find two men (probably father and son) with a peculiar first name: Perknéř in the period from 1415 to 1464. For a long time – until the early 18th century - this name found its way to the name of the estate. At the time, we can find it in written records under the name “Perknéřův” or “Perknířův” Ostrov.

The present name “Cyranův Ostrov” is associated with the arrival of Romedius Václav Cyranyi, a native from Upper Hungary, which is today's Slovakia. R.V.Cyranyi was a steward of Thun family estate in Ostrov. Although he was never the owner of the estate, his name was recognized in the name of the village. To the present day, locals commonly use the name “Cyránův Ostrov”.

The present estate is characterized by its Baroque modifications (chateau, granary, steward' house) which date back to the time of Zikmund Moravec, the estate owner who lived here in 1758 – 1784. Zikmund Moravec was the last owner who personally lived in Ostrov. He was granted an aristocratic title and a coat of arms by empress Marie Therese. The coat of arms, which can be seen on the Museum building, is the only preserved emblem of Ostrov.

Folk Costume Museum Ostrov is situated in a former outbuilding, which was primarily used as stables and cowshed. The central part of the building served as a residential dwelling. Its last modifications are Classicist and dendrochronological survey revealed that they date back to 1846, when Ostrov was owned by Jacob Joseph von Löwenthal. The large granaries in the western part of the estate were built at the same time.

After many twists and turns, the estate passed into the ownership of the Mičánek family in 2005. Under their stewardship, all the buildings and the estate were fully and meticulously restored and reconstructed in 2005 – 2008. Details about Ostrov owners and information about its restoration can be found on information tables by the entrance.
The eight-hundred-year history of this place oozes a distinctive, strong and pervading genius loci. Feel free to enjoy it.